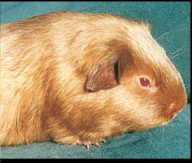 Porcilin Topaz
IMy breeding exploits began in 1997 with a Texel sow from Shimrock Stud (Cheryl Giles). I dabbled in a wide variety of breeds (mostly marked) trying to figure out where my heart lay. Facing a canine based disaster in 1998 I was left with three. When i decided to stay with the cavies i pulled out my book of standards and turned to the "New and developing breeds" page. Top of the list was the Argente. Reading the standard I decided that I liked the sound of them and would see if I could find some.

By some absolute miracle Miriam Hurst was there and low-and-behold she had some argentes with her. Some sows and a satin boar. Over the next few years I went back to Miriam for more stock, acquired some beige/golds along the way and a lemon/Lilac from Liz Hart (Liz Haywood back then). By now my goal was set. I moved out of home fairly young (17) and the piggies came with me. My first year out of home Topaz was born. My one regret was being so far removed from the showing world that this young boar couldn't blossom as he probably could have. But tragedy struck again and only Porcilin Skimbol and Porcilin Elle (both argentes) survived.

Torbay Coda
It was almost a year later that I moved back to Perth and had club access again. I went home with a very sad and sorry Glengrove Cory and a p/e white sow (the pedigree said white/lilac argente but I never really believed it). I also purchased some beige sows of Ken and Liz Hart and hoped to begin breeding beige/white argentes this time. So I started again with the stud prefix Torbay. But the beige/whites never happened. From my first Cory x Beige sow (No papers received) came Coda. Straight away I knew that the Gold/Lilacs were still special to me and his line continued right up to 2008 and my move to South Australia. My argentes did very well for me over there for the short time I was exhibiting but for whatever reason (okay.. it was political) I lost interest in the showing side of things. When my career in winemaking failed I had to leave everything behind to come to NSW and fresh study.

Afflexion Argente Sow
Well the year is now 2014. I am now a teacher and graphic designer. I live comfortably with a friend and am allowed pets again. Bring on the cavies! My first show was in february at the start of the show year for NSW Cavy Club and straight away I knew I was home. Thanks to Phillip specifically and Louise for selling me sows already in pig.

Thanks to the many and varied members for welcoming me into the fold and making me feel so at ease and at home. The golden Agouti's are off to a flying start and the lilacs will be off soon themselves. The Argentes will take their time, there is still a long way to go, but I'm glad that the challenge of them is still there.

So here be the era of Darkwing Cavies